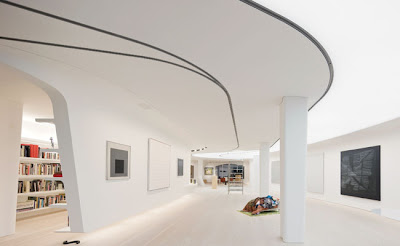 Ben van Berkel, principal of the Amsterdam-based architectural firm UNStudio, is known for his breathtakingly swoopy designs of sleek surfaces that never seem to end. The gleaming, aluminum-clad Mercedes-Benz Museum in Stuttgart, Germany, with its double-spiral-ramped concrete structure, convincingly argues the case [RECORD, November, 2006, page 128].
After completing that nine-story-high, 270,000 square-foot building, you might think that a 5,840-square-foot (gross) residential loft would be too rinky-dink a commission. Van Berkel argues otherwise: “I’m not interested as much in the scale of a project as with the program,” he explains. In this case, he was asked to design a loft in New York City for a collector of Modern and contemporary art, which he found fascinating. “It’s as if you’re making a portrait of someone and how he might live with his art,” van Berkel adds 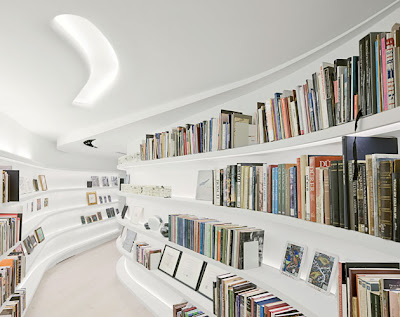 .
The owner met the architect when van Berkel was working on an ill-fated expansion of the Wadsworth Atheneum in Hartford, Connecticut, earlier in the decade. The collector, who had seen UNStudio’s famous Möbius House (1998) in Het Gooi, the Netherlands, says, “I found a clarity in the language and a logic of the space that made me think about the way I lived.” He decided to seek van Berkel’s help “in making sense out of the muddle that had become my art collection.”
The architect’s solution for the apartment, on a floor 95 feet long and almost 60 feet wide in a former light-industrial building, was as logical as it was novel: He pushed living spaces along the east and west party walls, saving the central portion for the gallery. At the north and south ends, the architect clustered living and dining areas, inserting a steel-and-glass wall on the south elevation, where a glass balcony allows unobstructed garden views.
The gallery walls of the central space meander sinuously, with a small library tucked behind the major wall on the west and defined by its curve. Even though the loft’s floor-to-floor height is about 11 1⁄2 feet, the client feared the art would appear cramped. He made it clear he didn’t want lighting fixtures to be visible or create any glare. So van Berkel came up with the idea of a luminous ceiling that would add the illusion of height. Like the one that UNStudio designed for the Museum Het Valkhof in Nijmegen, the Netherlands (1999), the ceiling takes on an ethereal quality, where artworks appear to float in space — ”a limitless haze,” according to the owner. 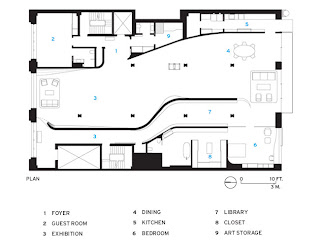 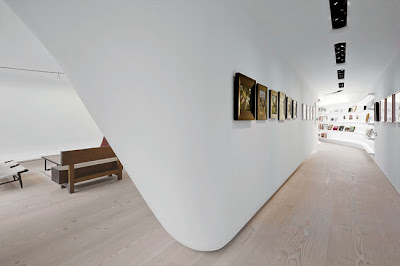