A vertically layered building that enables flexible living between in- and outside
Layers of vegetation, utilization of thermal mass and natural light enhance the quality of living while lending to the building’s sustainability. Basel-based Architects Herzog & de Meuron sent us some information on their latest project in the Middle East, the Beirut Terraces - a residential tower in the Lebanese capital. We share it whith you here on desMena: 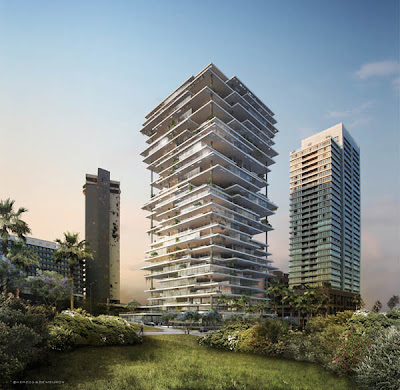 : The city of Beirut finds itself at the heart of the developing Middle East. As a cosmopolitan city throughout its existence, it always figured as a cultural hub of the region and - culturally as well as geographically - functioned as a link between Europe and the Middle East. By consequence Beirut’s urban history could hardly be more diverse; remains of Phoenician, Roman, Arab, Mamluk, Ottoman and colonial rule have shaped the city and its buildings, just as its past and eventful present have left their marks. The design of Beirut Terraces was quite literally influenced by the layers of the city’s rich and tumultuous history. The most immediate historical event, which those from Beirut will remember for generations to come, is that of the assassination of the Prime Minister Rafiq Hariri, which occurred when his car detonated in front of the St.Georges Hotel, its ruins are still visible as a daily reminder. Adjacent to the site there is a vast landfill of war-debris and trash from the several bombings since the 1970’s, but in the future this will change. Despite the scarred history, there is a clear vision to rehabilitate the area, the current masterplan already well under way aims to rebuild and bring life back to this part of Beirut. The site is located in a portion of the masterplan dedicated to building office and residential high rise buildings and is closely related to a new yachting marina. Architecture The proposed building concept, structure, and appearance are conceived by both awareness and respect for the city, as well as self-confident optimism that it shares with contemporary Beirut. The project is founded on five principles: layers and terraces, inside and outside, vegetation, views and privacy, light and identity. The result is a vertically layered building expressed by diverse sizes of slabs which create both openness and privacy and enable flexible living between in- and outside. Fine detailing and a focus on the concerted orchestration of decent materials make for an efficient and luxurious building. Conscious of energy use, the environmental engineering coupled with the integration of vegetation into the architecture, enhance the quality of living while also lending to the building’s sustainability.Layers and Terraces 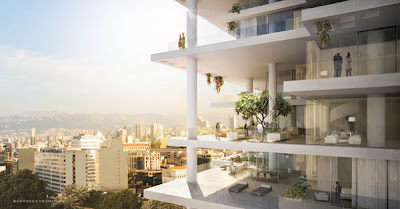 The building is a 116 meter tall multilayered high rise. Its stratified structure is differentiated by the individual residences set back or forward to allow for terraces and overhangs, light and shadow, and places of shelter and exposure. In this way unique places are created to be enjoyed by residents and guests alike. The individual apartments are grouped on the different levels in different formations and come together to carefully shape a new neighbourhood.

The moderate climate of Beirut is certainly one of the city’s biggest assets; it makes outdoor life not only an additional, but an integral part of Beirut’s urban life. Capitalizing on this asset and cultivating apartments that foster such specificities is one of the key design principles. Each apartment’s indoor and outdoor spaces merge, and in this way the terraces become integral to everyday living. 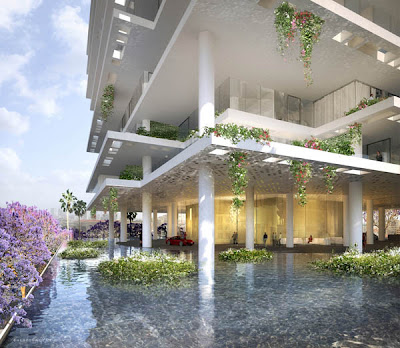 
The proposal for the vegetation blends in with the concept of the existing masterplan. The idea of a green boulevard that connects the residential high rise to its surroundings is taken up by the design and continued vertically both inside and outside of the building. The main entry, an airy high space is equipped with water ponds, plants and outlooks that open up the views to the sea in the north and the green boulevard to the east. The complement between architecture and suspended nature enlivens the spacious lobby around the central core and continues up to the balconies and terraces throughout the entire building. The entry sequence thus develops a consistent transition between the open, public landscape and private, green residences. Light and Identity


Extensive overhangs provide shadow and reduce the solar gains of the building to a minimum. Wherever needed, perforations mediate the levels of light and solar exposure. Their density, shape, and shadows generate an unmistakable pattern that clearly distinguishes the identity of the tower from its surroundings. Furthermore, the relative thickness of the floor plates is substantial enough to balance the daily temperature cycles by virtue of its thermal mass, storing heat over the course of the day and releasing it during the cooler nights. It is such passive strategies that make the building a truly sustainable place to live.
Posted by ArchiVerse at 7.9.10